The Internet is one of the best and most powerful information tools but it can be an enormous time sink if employees in the company have unrestricted Internet access. When those constantly on Facebook, Tumblr, Reddit and the rest are on the clock, that’s time and money they are taking away from the business! Providing users unrestricted Internet access is great, but not when it causes productivity issues. One way to deal with the problem is to manage and monitor access to the Internet so that you are efficiently using bandwidth, maintaining productivity and keeping employees happy.

Back when I was a police officer in suburban Texas, most of the criminals I dealt with weren’t very bright. Burglars and embezzlers, druggies and drunk drivers and domestic violence perpetrators, they had that in common. Even the ones who were well educated and held impressive job titles weren’t nearly as clever in carrying out their illicit activities. You see a lot of brilliant criminal masterminds in the movies but we didn’t see many of them in real life. But that was in Life 1.0, a.k.a. Life before the Internet.

One of the things that always made it easier for law enforcement to catch and prosecute the bad guys was the fact that the majority worked alone or with one or two fumbling, bumbling partners. From petty thievery to murder, most crimes weren’t well-thought-out. Criminal types were usually impulsive and consequently made a lot of mistakes that led to their downfall. The exception was organized crime, exemplified by the Italian Mafia – and members of those criminal organizations proved much more difficult to bring to justice.

IT resources in small and medium-size businesses are often limited and time savers are welcome. But some security short cuts may put your business at risk costing more than time in the long run. Here are five of the most common security mistakes SMB’s make and their simple solutions.

For the small to medium size businesses fighting to grow and make a profit automating everyday IT tasks is vital.

Even in larger organizations where IT teams are small and have a lot to do proactive threat management remains a low priority. That’s where automatic vulnerability and patch management comes in. Add deep network analysis and comprehensive risk assessment to the mix and you really have something of great value.

GFI LanGuard is a leading network security scanner and patch management solution that acts as a virtual security consultant. It gives you a complete picture of your network setup, provides risk analysis and helps you maintain a secure and compliant network with minimal effort. So how does LanGuard work?

Safeguarding your emails and files with GFI MailArchiver 2014

Safeguarding email is a must in today’s litigious society 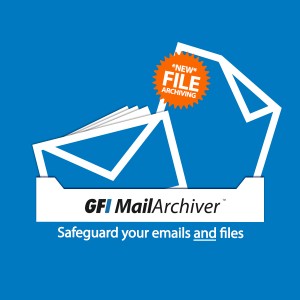 and archiving is the only way a company can do so effectively and securely. A new survey by GFI Software shows that more than half of respondents reported using their inbox as a document storage device and that external cloud-based storage alternatives are also posing a risk.

A new version of GFI MailArchiver is available today and we asked its product manager, Ian Bugeja, to tell us how GFI’s award-winning solution can help companies combat this problem.

Files. File archiving to be more precise. In earlier versions we had introduced a feature whereby users could manually archive files. Our customers loved this function and the recent increase in cloud-based storage services has only highlighted the importance of file archiving within the organization. That is what we have set out to address with the latest version of GFI MailArchiver. Road warriors are constantly using and saving files wherever it is convenient for them and the company often has no clue where these files are stored. We introduced new features that eliminate the need for employees to use public cloud-based services for document storage and this is done automatically for them.